Last Wednesday, the Chancellor, Rishi Sunak delivered what many would see as his first ‘proper’ budget’ - here's Carrington's breakdown of the Autumn Budget. 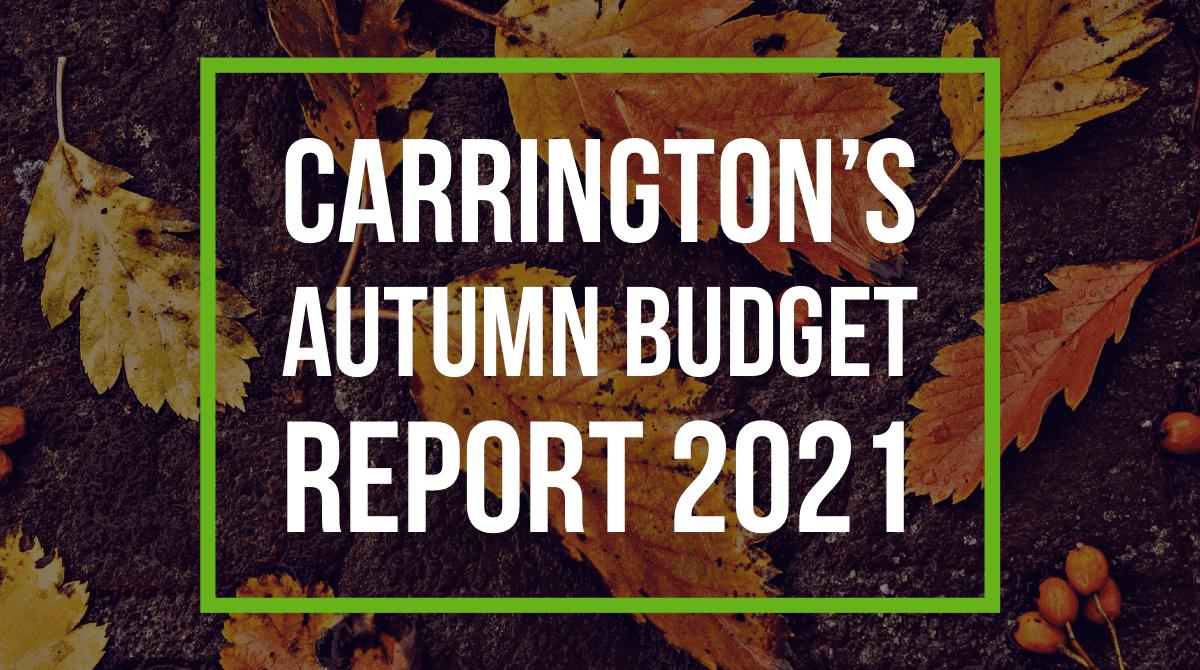 As you may have guessed we use a company to produce these for us and I must say that I am quite disappointed in the headline they chose for the front cover! Business rates may well have been cut and that of course is welcome, but for most of our clients the tax burden continues to increase and now stands at the highest level since the 1950’s! On trying to eek out some positives, the proposed fuel duty increase has been cancelled, it will be cheaper to fly around the UK and if you are a small brewery or cider producer it is ‘cheers’ all round. Oh, and of course there is some help on Business Rates.

Many of the headline grabbing announcements had already been ‘leaked’ in previous weeks and as such there were not many more rabbits left to pull out of the hat so for me, the budget fell a little flat. In fact it is almost easier to focus on what didn’t change rather than what was announced. I have taken what I feel are the most relevant announcements / no change to the majority of our clients and highlighted these below;

It was widely predicted that the Chancellor would increase the rates of Capital gains tax to align with higher income tax rates. However, these were left untouched, as was the tax-free annual exemption of £12,300. The most significant change was for those selling or giving away residential property (other than their main home), who will now have 60 rather than 30 days to report and pay any tax due. The requirement to submit a specific tax return relating to the sale of any second property came in from April 2020 and it is something that has fallen firmly under many peoples radar. It seems that many people, including solicitors do not know that this has to be done. It doesn’t matter if you have made a profit, broken even or made a loss – the return has to be submitted, albeit now 60 days after your completion date rather than 30.

There were concerns that the many tax advantages of pensions would be trimmed back. However, the only change was a positive one. From April 2024 low earners in net pay arrangements (where employee pension contributions are taken before tax is assessed) will benefit from a Government top up, so that they receive the level of tax relief they are entitled to. It’s estimated that 1.2m pension savers will be better off as a result.

The Chancellor left ISA allowances unchanged at £20,000 for a standard ISA and £9,000 for the Junior ISA. Any growth within an ISA remains free of UK income tax and Capital gains tax.

To encourage businesses to invest in plant and equipment, the Chancellor extended the £1m Annual Investment Allowance until March 2023. It had been due to revert to £200,000 from January 2022.

From April 2024 a business’s profit or loss for a tax year will be the profit or loss arising in the tax year itself, regardless of the accounting date the business has adopted. There will be a transition to the new rules in 2023/24.

I think it is worthwhile that I take this opportunity to cover off the main changes already announced in September as these will impact on many of you.

A new Health & Social care levy of 1.25% will be collected via increased employer and employee National Insurance contributions from April 2022. This will mean:

As always if you would like to discuss anything in detail we are more than happy to help. You can email me on nicky.owen@carringtongroup.co.uk.